The second season of Wander Over Yonder was announced on June 23, 2014 and premiered on August 3, 2015 on Disney XD with the half-hour episode "The Greater Hater". It is currently the final season of the series.

This season introduced a new villain who rivals Lord Hater as the greatest in the galaxy, called Lord Dominator and her quest to destroy the galaxy that Wander and friends inhabit.

On March 5, 2016, series creator Craig McCracken announced via his Tumblr that the series would not be returning for a third season.[1] The season and series concluded on June 27, 2016 with the half-hour finale "The End of the Galaxy".

It remains the only season of the series to not be aired on Disney Channel.

"The second season introduces new villain, Lord Dominator, a formidable rival for Wander and Sylvia, who threatens Lord Hater’s existence as the Greatest in the Galaxy. In the special half-hour season premiere episode, “The Greater Hater,” Lord Dominator’s arrival proves a true threat to the galaxy, turning Wander’s worldview upside down. The episode is the first of a four-part, good-versus-evil-themed story arc, which includes a musical episode written by Annie Award-nominated composer Andy Bean (“The Two Man Gentlemen Band”)." 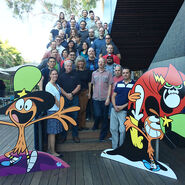 Photo of the cast during the production of this season.

On March 5, 2016, when the series' cancellation was announced, fans began a campaign titled #saveWOY to convince Disney to renew the series for a third season. As of 2021, it has remained unsuccessful due to the series still being cancelled and various members of the crew having been working on other projects.