Wander Over Yonder Wiki
Register
Don't have an account?
Sign In
Advertisement
in: Characters, Males, Villains,
and 5 more

O'Yojimbo is a character who first appeared in "The It". He is a plaid-obsessed ninja villain that terrorizes the galaxy, regularly moving between the lower and higher ranks on the Galactic Villain Leaderboard.

He resembles a diminutive humanoid alien with a pancake face wearing an all-plaid green or orange ninja outfit with a kilt and a tam o' shanter.

It is unknown what skills or powers he possesses, but he seems to be some kind of ninja. He is usually seen wielding a sai, a katana or a throwing star. Being the ruler of several worlds, he is likely a formidable conqueror with decent influence and power.

In "The It", O'Yojimbo was in the 43rd spot on the leaderboard and he ruled over two worlds until Lord Hater scared him off his plaid homeworld in a deranged game of Tag. Effectively gaining his spot and planet.

In "The Rager", O'Yojimbo somehow managed to conquer 9 worlds and moved all the way up to the 9th spot on the leaderboard, but eventually fell off it by the end of the episode. 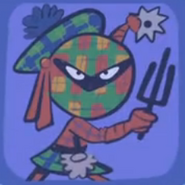