Wander Over Yonder Wiki
Register
Don't have an account?
Sign In
Advertisement
in: Characters, Locations, Planets,
and 2 more

Maurice is talking moon who is currently in a relationship with Janet. He first came when he noticed her and gave her compliments.

Maurice seems like a pretty polite moon as he complements Janet.

When Janet was trying stop Wander from escaping her, she fired a large volcanic rock at him and Sylvia. She then stopped the rock and it cooled down in space. The volcanic rock got caught in her rotation, and became her moon Maurice.

He's caught in the rotation of the planet Janet. Maurice seems to rotate around her very fast.

His revolution seems to cause his mustached side to always be facing Janet.

Maurice is currently in a relationship with Janet and loves her very so, as he compliments her. He also serves as her moon and rotates around her. 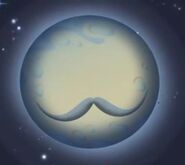