During the end credits scene of each episode, there is an animatic of a portion of the episode that was removed for time or changed. The following is a list of animatics for each episode.

Same as "The Greatest" (when paired or on the UK release).

Wander tries to get down the crater for an increasingly long time. While doing this, Peepers and Emperor Awesome are watching him besides Lord Hater.

Wander watches as the ants fight over a peanut. While Sylvia watches, a Watchdog punches her tail, but Sylvia later punches him, and face palms.

Captain Tim sleeps next to Lord Hater's bed while a music box plays in the background. At the end, he jumps at the camera and snarls.

Lord Hater's ship is blown up by the missile repeatedly from different angles.

Wander sings about everything visited on the ship while playing a guitar in Lord Hater's music room. As Peepers catches up to him, he quickly escapes.

Wander stomps from the right side of the screen to the left, growling evilly, and Sylvia follows him from behind.

The troll tries to yank the giant lock off the door.

Wander's hallucination of a recursive effect of himself holding the box while gasping "Wander?" is played in a loop with over 1000 Wanders appearing on the screen.

As the giant worm feels the jellyfish pie, it coughs and sputters.

Lord Hater is still sobbing over Westley's supposed "death", and Peepers comforts him saying they'll all miss him. Lord Hater reveals he was only crying because Wander and Sylvia escaped and doesn't know who Westley is, and continues bawling when the end logos come up.

Montage of the tourists annoying Lord Hater on his ship.

Buster runs around having fun, eventually destroying a planet in the process.

A visualized version of The Tale of Brad Starlight is shown.

Sylvia celebrates her and Wander's victory in many ways.

On Planet Ziziks, Wander says "Can we go?" but Sylvia keeps saying no.

Peepers gets trapped in the elevator.

Wander and Janet inside the cottage, Janet opens up a door which has trees playing the banjo and a trumpet, music starts playing and Janet makes Wander dance.

Lord Hater and Peepers as old men in a fishing village while Lord Hater's Theme is parodied as "Who is the universe's loneliest evildoer".

Sylvia trying different ways to get Huckleberry Knucklehead to move.

When the evil sandwich orders his servants to destroy Hater and Wander, Hater picks up the unconscious Peepers as Wander rides off with Sylvia. The other party guests flee the evil sandwich and get into their vehicles. The Black Cube, the remaining guest, tries to start his car.

The Epic Quest of Unfathomable Difficulty!!!

Wander finds a teddy bear and decides to go on another epic quest, but when a little girl, the owner of the bear, shows up to claim it, he gives it to her and says, "Huh, they can't all be epic quests".

It's complete nothingness, then a door opens, revealing Lord Hater and Peepers behind it, Lord Hater can be heard saying "Whoa!" when the logo pops up.

Wander and Sylvia clean up the town.

Resuming from where the final scene left off, Hater does a photo comparison between Sylvia and her Linguini von Breadstick disguise. Still, he can't tell the difference.

Commander Peepers, discouraged that Hater is "best buddies" with Wander instead of him, cries himself to sleep in his bedroom. He begins to angrily trash, and then sadly fix, everything that reminds him of Hater in his room.

Sylvia tries to sip her drink, but the mother bird keeps zapping her.

Lord Hater is close to dumping Little Bits in an oil vat but she manages to hypnotize him out of doing it.

Lord Hater, dressed in his swim trunks, dances up to his hot tub. When he steps in, the water freezes and he struggles to get out. He screams "NOOOOO!" during the logo.

While we see Hater's ship soaring, we hear Hater and the Watchdogs eating lunch from inside the ship.

The Watchdogs sit anxiously outside Lord Hater's bedroom while Hater and Peepers re-think their lives.

Lord Hater and Sir Brad Starlight are immaturely slapping each other. At one point, Lord Hater accidentally hurts Brad and asks if he is okay, only to anger Brad and make the fight continue.

A repeat of the final shot of the episode, which pulls out to show it being watched on a screen by Lord Dominator, who laughs maniacally. This scene is a cliffhanger and resumes in the season 2 opener.

Lord Hater is trapped in a pile of ornament aliens.
Note: This animatic is shown with "The Gift 2: The Giftening" when viewed on demand.

Three Watchdogs are seen playing cards with one of them realizing that he has been calling Lord Hater the wrong name.

Lord Hater plays with the Wander figurine from his cake.

Sylvia and Commander Peepers are shown having a similar dream while sleeping.

Dr. Screwball Jones sits at his desk and thinks of puns.

The three dancing Wanders are shown dancing to the same ditty played in the episode.

Lord Hater acts as if he were a robot in the same manner as he did earlier in the episode. When Hater "shuts down", Peepers proceeds to "oil" him.

Stella Starbella finds a nickel and accidentally drops it. The nickel starts to spin when it hits the floor. Wander proceeds to pick it up, but Stella tells him to stop, saying it's bad luck to stop a spinning nickel. As the nickel continues to spin, the King of Sherblorg 7 calls again, still waiting for help to arrive. He also asks if the socket wrench has been found and states that he ironically has one.

Peepers explaining his invasion plan to the Watchdogs.

Barry the Watchdog is shown playing with action figures.

The turtle from the viral video at the end of the episode continues to eat pancakes.

Commander Peepers dreams that he is a unicorn.

Lord Hater talks to Major Threat in a similar manner to Wander.

Still smitten over Lord Dominator, Lord Hater continues daydreaming about her, much to Peepers' chagrin.

Lord Hater and Commander Peepers are in the garbage compactor. Hater furiously rummages through the trash to find his letter to Dominator. He finds an earlier draft, which he promptly and angrily crumples up and discards. Suddenly, the walls start closing in, prompting Hater to exclaim, "No-no-no-no-no-no-no-no-no!" during the closing logos.

Peepers makes Lord Hater thaw the Skullship with a hairdryer.

The Black Cube cleans up his apartment and gets ready for a date with his new girlfriend, Tracy, who is heard leaving a message on the answering machine.

The Eye on the Skull Ship

A Watchdog prepares to punch a punching bag with Sylvia on it, only for the punching bag to crush him repeatedly.

The family of tourists snap photos of Wander.

Lord Hater's detached arm is shown with its finger still in the black hole while the wind blows.

A memoriam of all of the Watchdogs injured throughout the episode.

A parody of the He-Man Sings meme with the cartoon Lord Hater.

Waves wash away the sand drawing of Wander and Beep Boop (Bot 13) that the latter made earlier in the episode.

A preview of "The Real Zbornaks of Zborvek" plays on the TV screen.

Jerry, still hiding in the closet, is discovered by Lord Dominator. Jerry attempts to escape, only to crash into another wall. Dominator walks away saying "What is with these guys?"

Lord Dominator hums You're the Greatest while cleaning, complaining about its catchiness soon afterwards.

While walking through space, Sylvia comments on the children's stories and wonders where Wander actually came from. Just before Wander tells her about himself, the end logos and a long beeping noise cut him off.

Hater shooting at Awesome's leaves in the air.

As Wander and Sylvia leave the party, the latter apologizes for wasting time with the High Gnees, when they could have been "enjoying nature's booty". This causes Wander to laugh once more as Sylvia states that she meant to say "beauty" during the end logos.

The Waste of Time

Wander watches his past self attempt scoot down the hill during the events of "The Picnic".

Sometime after the events of the episode, Brad has apparently married the leech lady. She gives him a wedding anniversary present, after which they kiss, much to the disgust of their children.[1]

Wander continues to help the slugs cross the street while vehicles honk impatiently.

The Search for Captain Tim

A clip of the Phantom Mimes is shown as the gramophone-type music is heard.

Wander is in the orbble sneezing around.

The Bitties' planet continues floating around the galaxy while the Bitties are fascinated by their surroundings. A figure that somewhat resembles Wander then enters and plays the theremin.

Dominator continues sneezing as she orders the Dom-bots to apprehend Wander and Sylvia. She is then given a handkerchief, with which she blows her nose during the end logos.

The End of the Galaxy

Lord Dominator wanders the regrowing galaxy with the fruit she took from Wander, attempting to peel it. She storms away after the fruit sprays her in the face, grumbling "they'll get what's coming to them". The camera then pans down to reveal a small U.S. space pod that crash-landed on a nearby planet as a flash of lightning shoots out and monkey screeching is heard fading into Hater's laughter, foreshadowing the currently cancelled third season. 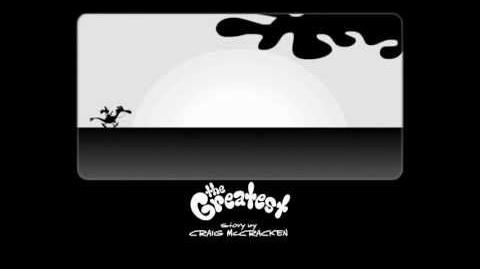 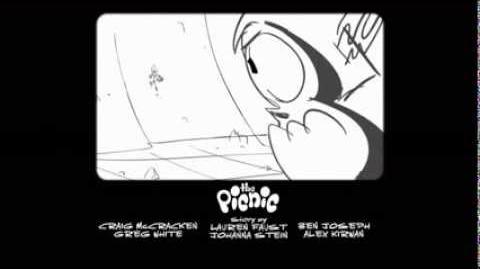 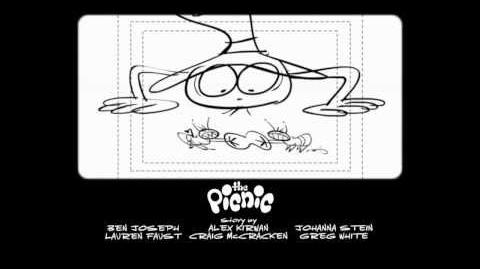 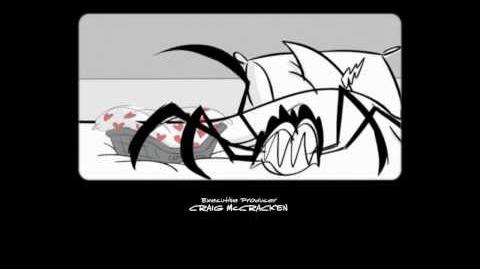 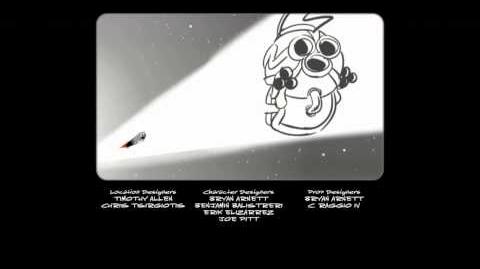 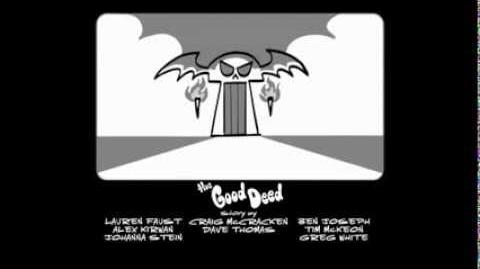 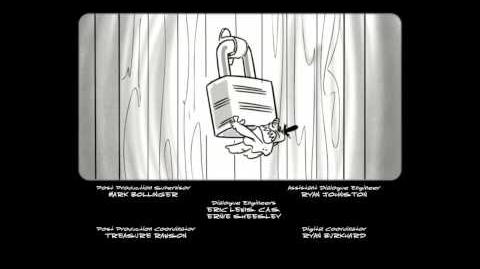 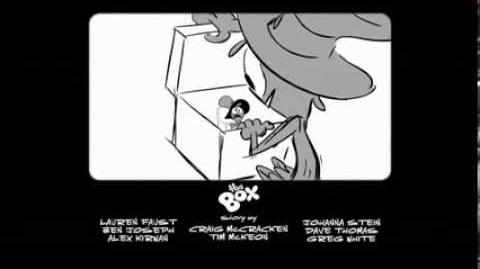 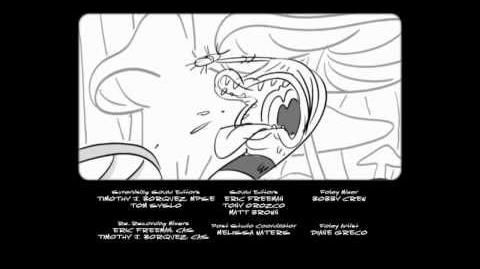 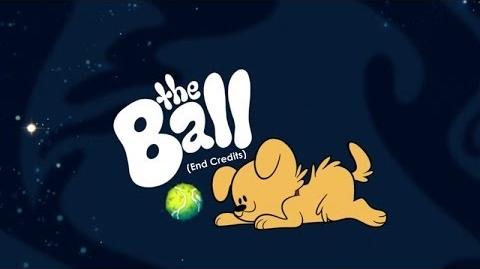 Wander Over Yonder- The Day & The Night Animatic

Wander Over Yonder - The Gift 2 The Giftening credits WITH AUDIO

Wander Over Yonder The Buddies Animatic

“The Liar; The Stray” End Credits Via Craig McCracken

Wander Over Yonder "The Helper" Animatic

Wander Over Yonder- "The Rider" Animatic

Wander Over Yonder- "The Gift" Animatic

Wander Over Yonder - The Epic Quest of Unfathomable Difficulty credits
Community content is available under CC-BY-SA unless otherwise noted.
Advertisement