Wander Over Yonder Wiki
Register
Don't have an account?
Sign In
Advertisement
in: Characters, Males, Villains,
and 3 more

Kragthar of Kraaaaagtttthh is one of the notorious villains in the galaxy who is consistently among the highest ranking villains on the Galactic Villain Leaderboard.

Kragthar is a very tall and muscular monstrous being resembling a demon, having large horns, sharp teeth, tusks and nails, and hoofed feet. He also has a pig-like nose and seems to exude some kind of pink flame-like energy from his back and head. He normally wears a simple pair of black pants and arm braces. In "The Fancy Party", he wore a fancy tuxedo.

Kragthar is an evil and ruthless tyrant who likes to gloat. Despite his intimidating appearance, he is actually a desperate individual (much like Lord Hater) who was willing to humiliate himself and act like a fancy gentleman in order to impress Queen Entozoa. He dislikes it when others pronounce his name wrong and will continuously try to get others to say it right even if it distracts him from an objective.

Kragthar likely has great strength and being the ruler of many worlds likely shows what a powerful and fearsome tyrant he is. However he has yet to be shown using any actual powers and his full strength is unknown, as he has never been seen using any powers in combat and every time he is seen, he has either been carried or blown away. He also does not seem have any weapons or servants.

In "The Fancy Party", Kragthar was one of the many villains who attended Queen Entozoa's dinner party in hopes of being chosen as the heir to her army and empire. Shortly after party began, he told Queen Entozoa that she didn't look a thousand years old at all and didn't even look a day over four-hundred in a vain attempt to charm her. Entozoa quickly became angry with him for acting so weak and desperate by using something as cowardly compliments to impress her. She then had her guards escort him off her planet.

In "The Gift", Kragthar was one of the many people across the galaxy who received a gift from Wander and Sylvia, and he seemed quite content.

In "The Battle Royale", Kragthar was one of the many villains who came in search for the rumored "Ring of Invincibility". Kragthar was the first to reach the ring, but he was quickly blasted off the ring's platform by a rival villain. Later when Lord Hater made his way to the ring, he was captured by Kragthar who attempted to intimidate him, however Hater was instead left dumbfounded by how to pronounce Kragthar's name and title, with Kragthar attempting to explain it to him. Hater then managed to escape his grasp and blasted Kragthar into space while still mispronouncing his name, much to Kragthar's annoyance.

In "My Fair Hatey", he is shown to be imprisoned along with the rest of the galaxy's villains on Lord Dominator's ship. 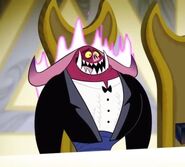