Wander Over Yonder Wiki
Register
Don't have an account?
Sign In
Advertisement
in: Characters, Minor Characters, Recurring Characters,
and 8 more

Captain Tim is a spider-like alien that Wander discovers on an abandoned spaceship and names. He is first seen in "The Pet", when Sylvia and Wander find an abandoned ship and search for people to help. In "The Search for Captain Tim", it is revealed that Captain Tim is an Arachnomorph, a race of highly aggressive aliens. He appears smaller than most members of his species.

After Sylvia looks around and regroups with Wander, he finds a creature that coughs up a dog tag that reads "Captain Tim", so he named him according to this, which originally belonged to the ship's captain. It is unknown how the alien arrived on the ship, but once aboard, it is strongly implied that he escaped and attacked the crew. Nevertheless, Wander begins training him and treating him like a dog, despite the creature's aggressive behavior. Later on, he gives Captain Tim a stuffed animal and he rips it to shreds, covers it in acidic gel and sticks it to the ceiling. Wander then screams in excitement, signaling Sylvia to rush to find him. She sees the orange stuffed animal on the ceiling thinking it is Wander and panics to take him down. She thinks he is dead and commands the ship to self destruct. It responds with "no takesy backsies". She is sent into an escape pod sad and miserable thinking not to turn back but when she sees Wander in the window of the ship she quickly leaves the escape pod and hops on rocks and asteroids to get to the ship. When she crashes in, she tries to turn off the self-destruct but can't, so she runs to get Wander. She finds him with barely enough time and escapes while the ship is exploding. When they get into the new bubble of orbble juice, Wander says that Captain Tim is good and shows Sylvia some tricks. Eventually, Captain Tim attempts to consume Wander's heart and Sylvia, panicking, threw him outside the bubble. Wander and Sylvia compromise and agree to give him to Lord Hater.

On Lord Hater's ship, Peepers and Watchdogs are going crazy from the vicious alien but Hater likes him. At the end, Wander asks Sylvia if he can visit him sometime and she replies "Absolutely not." He makes a cameo appearance in "The Little Guy", "The Eye on the Skull Ship" and "The Bad Neighbors".

The crew's bones can be seen

The crew's bones can be seen 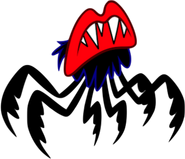